Four Kievans are housed in a Saint-Paul family. They tell about their arrival in France and their new living conditions, hoping to be able to return to Ukraine quickly.

Despite the tragedy knocking on their door, the Lovchenko family is happy to have found a place of rest for a few days in the Saint-Paul countryside, thanks to Laurence and Jacques Lemarchal.

Olga Lovchenko was a graphic designer in Ukraine, running a small business with seven employees. The invasion of his country, begun by the Russian army on February 24, partially put an end to his work and family life. “During the alarm in Kyiv we had to flee to the emergency shelters. One day the authorities came to my family and told us to leave town. My husband is mobilized at the front.”, She says. Olga, her children Veronika and Maxime and grandmother Ludmilla then take the car. Direction France, which they reach a week later.

At the same time, Laurence and Jacques Lemarchal, who have retired from national education and the pharmaceutical sector for fifteen years, are thinking about getting involved in helping the Ukrainian people. “With my wife we ​​watched the news on TV and thought about how to act in our personal situation. We made contacts in the country and finally we were able to be introduced to this family via the Drôme prefecture Red Cross. We were willing to take him because we have space and time.” presents Jacques Lemarchal. The Lovchenko family thus arrives at the couple’s large residence in the countryside of Saint-Paul.

Olga Lovchenko, her children and Ludmilla immediately got used to the local climate and people. “Veronika is educated at our city school while Maxime is in a special class at Lapassat College in Romans.” states the mayor of Saint-Paul-lès-Romans, Gérard Lunel. The wave of solidarity was felt immediately in the community, as noted by Jacques Lemarchal. “We were entitled to donations including clothing”. And Olga adds with a smile: “We have more clothes in France than in our house in Kyiv!”

The mother of the family keeps up to date with what is happening in her country every day, but refuses to talk about her husband, who is now engaged at the front somewhere in Ukraine. The children have gotten used to their reception conditions, just like Ludmilla, who always reads and watches the news from her country. “They will initially stay until April” indicates Jacques Lemarchal, who makes sure that everything runs well under his roof. The French couple are ready to extend the reception if necessary. Olga is still in a little hurry to return to normal life in the capital of Ukraine. Above all, everyone is hoping for an end to the conflict.

Also read: the Evangelical Diaconate for the immediate support of the Ukrainian refugees. 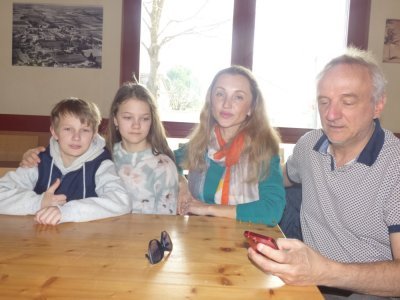