DFrom April 8th, Laura Rietveld will present her observational documentary “La famille de la forêt” in cinemas in Montreal, Quebec, Sherbrooke and Rimouski. Inhabited by the themes of identity, family and the connection between man and nature, the director and screenwriter followed a family of Belgian origin – Gérard Mathar, Catherine Jacob and their three sons – who at heart live a life “different from the rest” of nature, in a boreal forest on the Gaspé Peninsula. To learn more about this feature film, we spoke to the filmmaker about her inspirations, artistic approach and the experience she gained in completing her documentary project.

Fascination for an attitude towards life

When Laura Rietveld was traveling with her family in Gaspésie in 2015, her paths crossed with Gérard Mathar and Catherine Jacob. Far from being indifferent to her journey, she naturally felt the desire to tell her story in a documentary.

«The artist in me immediately responded to the beautiful world that Gérard and Catherine have built for themselves in the Gaspé forest!”She explains. “Man’s relationship to nature was one of the themes of my first documentary, Okpik’s dream. I had just finished the latter when we met, and it was Gérard and Catherine’s connection to nature that first caught my attention.”

Determined to embark on this project, she then became interested in the fate of the couple’s three sons: Côme, Ossyane and Jonas, who had reached that crucial moment in their lives, the transition to adulthood. The focus was on the question of their personal decisions and the will – or not – to follow the same path in life as their parents.

Little by little, an ambitious plan was born for this family, who decided to build a house for the three boys, and to do it with their own hands.

“This movie will make you think about your life and life choices!”our interlocutor enthuses. “It could also make you want to live in Gaspésie”she adds with a smile in her voice. “But that’s not what it’s about! I hope it inspires people and inspires them to appreciate and find beauty in the world they live in.” 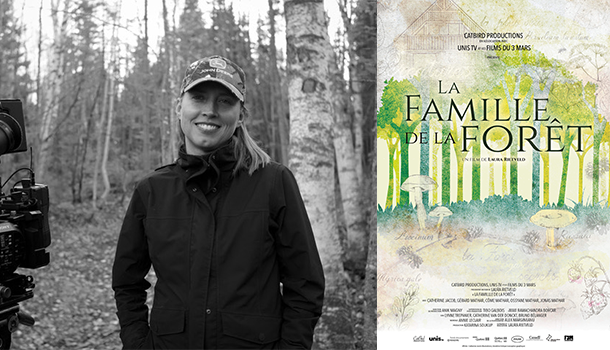 To be inhabited throughout the creative process

Laura Rietveld makes no secret of it, she experienced this directing project intensively during the seven years (!) of the creation and shooting process The forest family.

«Filming this family in the forest, with their animals and in their daily life was one of the greatest joys of my life!” – Laura Rietveld

However, the editorial period was not without its challenges for the designer. In fact, she was completely engrossed in this step… and sometimes not without surprises!

“Editing the film, figuring out how to turn 60 hours of footage into a film, and completing it in that time frame was a different experience than the rest. I got so caught up in it that in the fall, when I was bringing my son with the Got to pick up bike from school and lost balance. I went over the handlebars and slipped on the gravel. I fell because I was editing the film in my head and wasn’t paying attention!”She remembers. 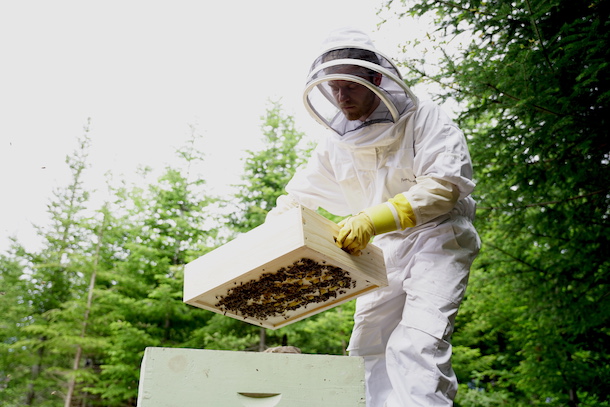 A project well thought out down to the last detail

Be that as it may, Laura Rietveld does not regret for a minute having invested so much in the creation. She cherishes the time she spent with her cinematographer Alex Margineanu where they had a lot “discussed colors and drew inspiration from the work of painters like Rembrandt and Emily Carr.”

And then the entire team leaned forward to incorporate every little artistic decision in the development of the film. The director took great pleasure in using Lynne Trepanier’s field recordings with sound engineer Bruno Bélanger. The music’s composer, Ramachandra Borcar, competed in her creativity by transforming sounds of juniper berries and green alder catkins into percussion instruments.

The filmmaker also admits spending more time with her team than her own parents during COVID-19!

“All of these employees are people who have dedicated themselves to their job with body and soul,” she explains gratefully. “They are respectful and sensitive artists, but also good companions.”

And make their joint efforts The forest family cinematically poignant, captivating and exotic at the same time. One thing is for sure, the question of your own choice of life will keep you busy for a long time!

Click here for more information on this feature-length documentary presented by Les Films du 3 Mars and Catbird Productions and to find out the dates of showings at a theater near you.

*This article was produced in collaboration with Les Films du 3 Mars.

His heart beats between fashion and music! Mathilde is always creative and likes to play with words. In fact, she treats them with finesse to challenge the reader and share her two great passions: culture and style.