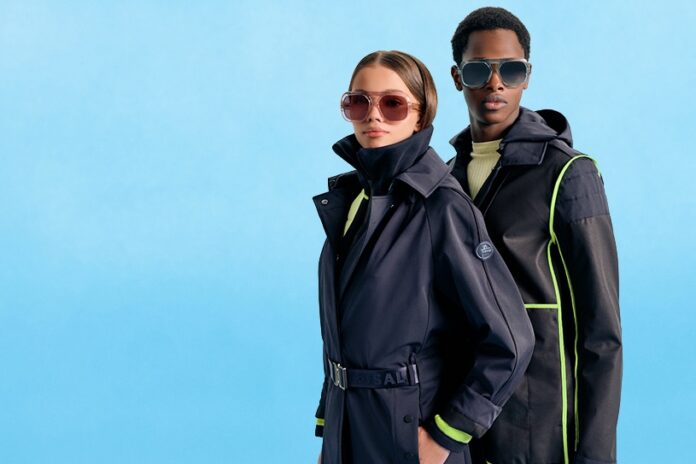 Fusalp is a true symbol of French know-how in the world of skiing. From a small boutique in Haute Savoie to a supplier for the Olympic Games, this brand has evolved over time without ever losing its chic and authentic side.

Fusalp, has had very prominent shareholders since 2014. Sophie and Philippe Lacoste and Philippe’s wife Mathilde sold the shares in the company Lacoste, founded by their grandfather René Lacoste, to the Swiss company Maus for one billion euros and were looking for a new challenge. Once they have their sights set on Fusalp, the deal closes very quickly and they have a majority stake in the premium skiwear brand.

Between the lake and the mountains, Fusalp grew and thrived in Annecy. Founded in 1952 by two local tailors, Fusalp quickly revolutionized skiwear. Their know-how from their experience in haute couture and their original cuts have allowed them to create innovative products for the ski industry.

In this region, home to many champions, there is a spirit of competition that occupies an important place in the brand’s creative universe. Performance and competition are therefore the inspirations of Fusalp clothing.

Alexandre Fauvet – CEO of Fusalp (and also former employee of Lacoste SA) since 2014 talks about the brand: “Fusalp is one of the brands of French Olympic heritage. It has a very long and rich history in France and abroad, as well as a product know-how oriented towards innovation. Fusalp inspired the fashion designers of the 1960s and 1970s and launched its own prêt-à-porter collection early on.”

The first “Fuseau” stretch ski pants, the brand’s emblematic product, were made in the 1950s for sports competitions. Their tapered cut combined with the first innovative and technical fabrics gave them a stylish look and excellent technical characteristics, which made for standing at peak performance.

Almost falling into anonymity and oblivion, especially after bankruptcy in 1984, Fusalp was able to re-emerge into a chic and urban brand thanks to the trio of investors who came straight from the world of tennis.

Made with new technical fabrics, the Fuseau has become a unique and essential fashion item on the trails. Today, Fusalp is no longer just focused on skiwear and the company is expanding into other areas.

With brand ambassadors such as Antoine Dénériaz, Olympic champion in downhill skiing in 2006, the brand has surrounded itself with experts who contribute to the development of new innovative products. Thanks to athlete feedback, the brand has been able to adapt its textile technologies for more lightness, waterproofness, breathability and warmth.

From now on, Fusalp will attack America. Starting next November, she will be opening her first store in the famous ski resort of Aspen, Colorado. Then it’s New York’s turn and some other must-see spots in the United States. Today, Fusalp will soon have 50 stores worldwide and a sales target of more than 40 million. In 2014, during the takeover, the turnover was just under 6 million euros… And the Lacoste family doesn’t want to stop, they want to wait for the heights with Fusalp, and the world market for sportswear is expected to reach 250 billion in 2026.