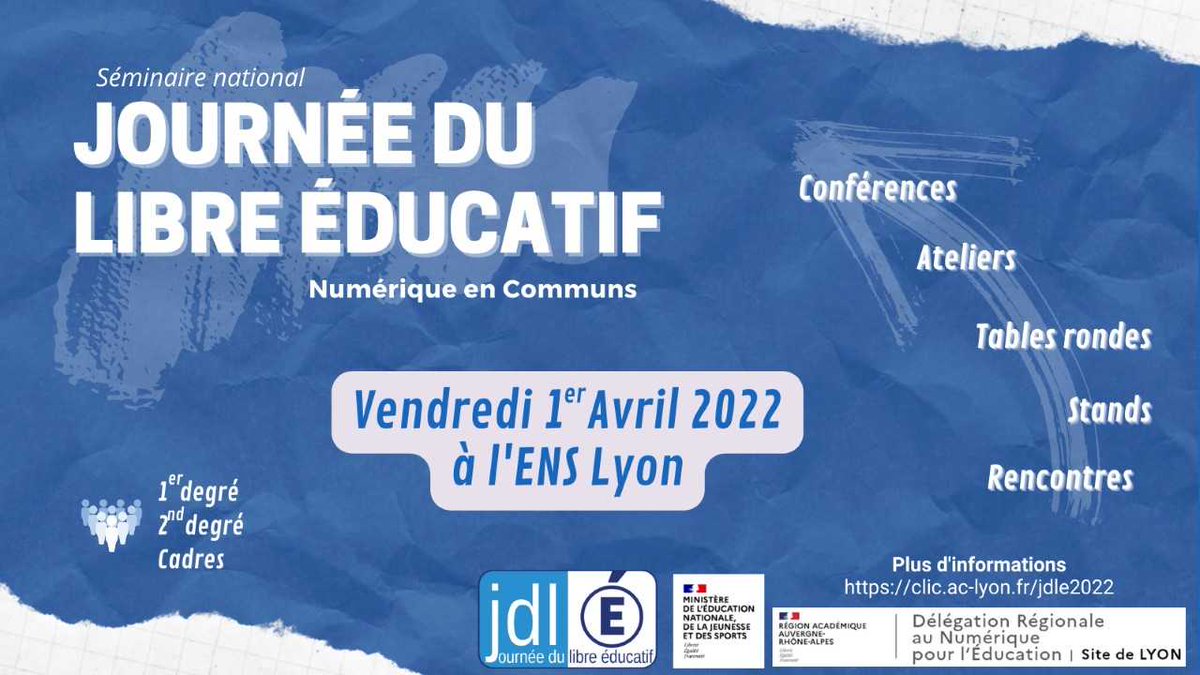 In Lyon this April 1st it was not fish: one finds very nice resources in the National Education in terms of Free and they receive a better reception than one could fear in a ministry that is considered too addicted to agreements with GAFAM is applicable . Lyon hosted the first Free Educational Day (#JDLE2022 on social media: more here Twitter), jointly organized by Lyons DRANE (Regional Academic Delegation for Digital Education) and the Department of Digital Education (DNE) of the Ministry of National Education.

Alexis Kauffmann, founder of Framasoft, was hired at DNE in September 2021 as a project manager for software and free and mixed educational resources in the digital fields. Suffice it to say that the Friday seminar was a milestone for this mathematics professor at the origin of one of the most important free software associations in France. The day he helped organize on Friday (which the ministry says is set to be repeated annually in nomadic mode) was extensive: it brought nearly 400 people face-to-face (including yours really), plus netizens who followed from a distance. Between general conferences, workshops and stands of companies and associations, this day was a great opportunity to discover or review many projects.

Twelve followed in the morning on the stage for express presentations (mostly with workshops to get to know each other in the afternoon) in an impressive abundance and variety. I’ll get back to the blog on this very busy Friday, but here’s already a synopsis and links for those twelve projects:

Jitsi box. A free video conferencing solution (produced by the Digital Lab of CentraleSupélec and France Université Numérique) for hybrid teaching, based on Jitsi that allows video recording even when the connection is limited. An operation takes place throughout the department of Vosges.

Canoprof. Free software based on Scenari, adapted to the needs of course building and scripting teachers, proposed and implemented by the Canopé network (teacher training, support in the acquisition of digital tools).

Polymny Studio. A free software to create instructional videos from LibreOffice documents, Powerpoint, etc.). This solution has more than 5,000 users.

The workshop. A project management tool developed by Lyon Academy under the Apache 2.0 license since 2018.

Vikidia. A free encyclopedia for 8-13 year olds, similar to Wikipedia (the rules are generally the same and the publishing software is identical). To date, 34,000 articles in French and 2.5 million visits per month during school hours.

capital city. Service for sharing educational programming activities (from the Paris Academy) with a library of activities shared by teachers. At the end of 2020, it had more than 180,000 users (155,000 students and 25,000 teachers) in 2,500 high schools.

PrimTux. A free distribution based on Ubuntu or Debian, depending on the version, for primary schools. The software library contains many free applications and self-corrected exercises. PrimTux was founded seven years ago and equips 180 schools in France.

sesame. Math for everyone, with this veteran among the featured projects (see this interview from 2006 and this blog post from 2009), because Sésamath is over 20 years old! Content worthy of its age, with (free) manuals, interfaces for creating exercises, a forge, a skill rating system, etc.

Text2Quiz. Allows creating a quiz from a text file. This free online tool was created by Cédric Eyssette, Professor of Philosophy, who placed it under the GNU GPL 3.0 license.

More information gathered that day is yet to come. In the meantime, a Twitter account follows for anyone interested in free and popular digital learning software: @lelibreedu.

Free Software: The government wants to cultivate the community – November 12, 2021

National Education: Why Microsoft is a Hard Drug – September 11, 2020