A thug who killed an unborn baby by kicking an expectant mother like he was ‘taking a rugby penalty’ has been jailed.

Roger Bygrave had swallowed ten pints of cider when he attacked Alison Boulton at the Market House Inn in Dartmouth, Devon.

Ms Boulton, who was trying to calm a dispute in a pub, was 28 weeks pregnant at the time of the attack.

Owner Mark Edwards later told police the defendant kicked the victim as if he were playing in a rugby match.

Surgeons performed an emergency C-section the next day, but baby Robyn was stillborn.

Bygrave has now been sentenced to 30 months in prison for the assault that took place on Valentine’s Day two years ago. 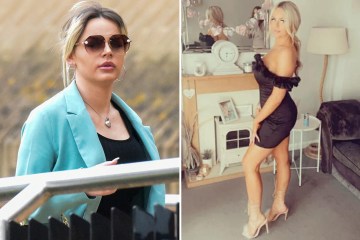 Judge Peter Johnson told the defendant Robyn was a “perfectly viable” baby up until the time of the attack.

“The pain caused by the loss of Robyn is unimaginable,” he said.

“It will leave permanent physical and emotional scars. »

Bygrave, 37 and from Dartmouth, admitted causing grievous bodily harm without intention. He was acquitted by the jury of infanticide.

The court heard that Ms Boulton and her sister were commemorating the anniversary of their grandfather’s death on the night of the attack.

Bygrave made a fuss outside over drinks, giving staff the middle finger before being confronted by the owner.

The victim, a mother of six, came out to calm the situation. Shortly thereafter, the defendant kicked him in the stomach.

Bygrave later told police he was “slapped and punched” in the head by a mysterious assailant before kicking himself for protection.

“Someone jumped on me. It happened so quickly,” he said.

“I didn’t intentionally kick him in the stomach. I had no intention of killing her unborn child.

“I had no reason to want to hurt her or the child – I defended myself. »

However, prosecutors alleged Bygrave was hit twice by Ms Boulton after urging the landlord and acted in retaliation while she behaved “difficultly and aggressively”.

It has been claimed that Bygrave knew Ms Boulton was pregnant and focused his kick on her lower abdomen “like he was kicking a door”.

He kicked him like he was taking a rugby penalty

At the time of the attack, the victim was wearing a tight red velvet dress.

She said in court she lost her job and was struggling to leave her home.

“I was confident and outgoing and all of that has changed. »

Sean Bruton QC, mitigating for Bygrave, said the accused “rolled people up” in the hours leading up to the attack and was “a bit of a jerk”.

He cried when he found out the baby was dead, we heard him.

“It was a terrible incident,” said Mr. Bruton.

“The consequences were terrible. »